Lindsay: Local MP Jamie Schmale released the results on the latest riding-wide constituency referendum. Just over 65% of respondents across Haliburton-Kawartha Lakes-Brock say they wanted Schmale to vote in favour of Bill C-7, An Act to amend the Criminal Code (Medical Assistance in Dying).

“As I have done with two other constituency referendums, I decided to seek input and guidance on how I should vote at Third Reading from the residents of Haliburton-Kawartha Lakes-Brock,” said Schmale. “This referendum allowed me to hear from as many people as possible in a short period of time.”

Over the last several weeks, each household in Haliburton-Kawartha Lakes-Brock should have received a copy by mail of the constituency referendum publication which laid out arguments for and against Bill C-7.

Medical Assistance in Dying (MAiD) is already lawful in Canada, as long as the process is carried out in accordance with a series of conditions which were enacted by Parliament in 2016.

Some of these conditions have since been successfully challenged in court. The Quebec Superior Court ruled that some of the restrictions in the existing law are an unconstitutional violation of Section 7 of the Charter of Rights, and the law must be rewritten to expand the range of circumstances under which MAiD will be permitted. Some of the provisions in Bill C-7 are a direct response to the Court’s ruling, while other provisions are not court-mandated.

The Third Reading of Bill C-7, An Act to amend the Criminal Code (Medical Assistance in Dying). Had its Third Reading on December 10, 2020. MP Schmale voted in favour of the legislation based on the results of the riding referendum and ballots received prior to the start of the vote. The Bill passed in the House of Commons with 213 MP voting in favour and 106 opposing.

“Many residents, wanted to ensure I heard their voice on this topic,” noted Schmale. “Many of the ballots were sent in with letters, comments, and personal stories. As Member of Parliament, I value that feedback.”

“People are engaged, they want to be heard. I want to thank every person across this riding who took the time to express their views and take part in this referendum,” added Schmale. “It is encouraging to see so many people taking the time to mail back, or in numerous cases, hand deliver their ballots to my office.” 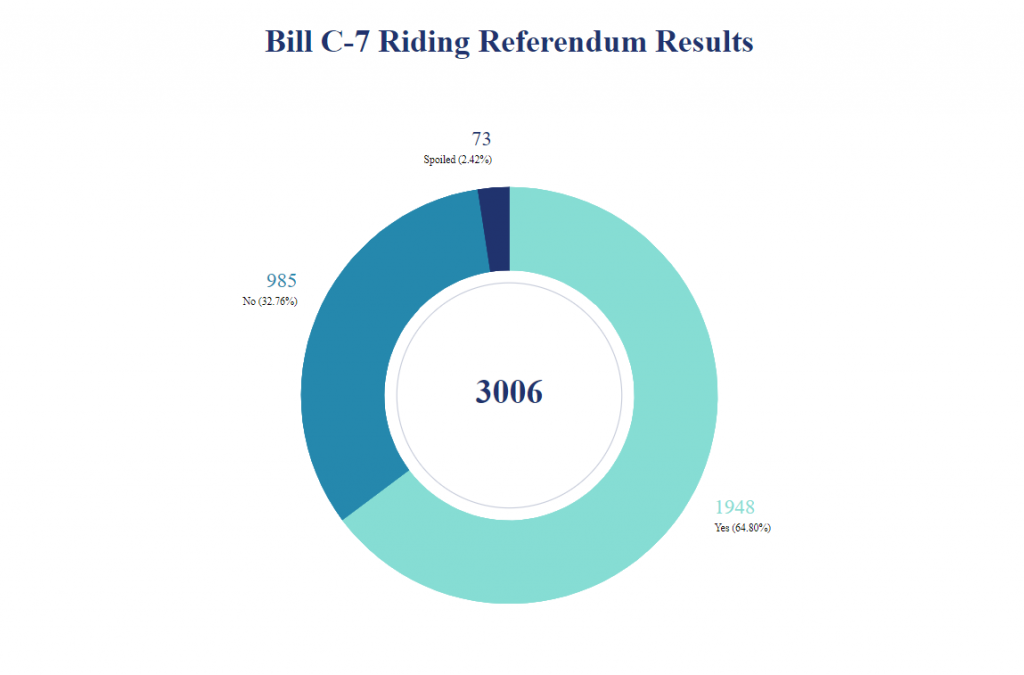