“I want to recognize the individuals and organizations in our communities that have made our riding what it is today,” said Schmale. “Our community’s deep roots in agriculture and the contributions of faith communities, service clubs and many volunteers have played an important role in our history.” 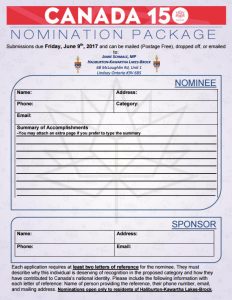 Canada has had a long tradition of commemorating the Confederation of Canada and recognizing deserving Canadians the first of which happened in 1867 and continued in 1927, 1967, and 1992.

“Unfortunately, the Liberal government decided not to issue a commemorative medal in 2017 to mark the Canada’s 150th, however I believe this is an important tradition that I felt should be continued,” added Schmale. “There is no better way to celebrate this important year than by recognizing the outstanding contributions of the people who have made Haliburton-Kawartha Lakes-Brock great.”

Nominations are open to residents of Haliburton-Kawartha Lakes-Brock and submissions are due by Friday, June 9th 2017. Applications are available online (www.jamieschmale.ca) or can be picked up at MP Schmale’s constituency office located at 1- 68 McLaughlin Road in Lindsay. Each application requires a minimum of two letters of reference for the nominee and a sponsor.