LINDSAY: Local MP Jamie Schmale will join his colleagues from across Canada this evening in the House of Commons for Third Reading on Bill C-14, The Medical Assistance in Dying Act.

“Due to the magnitude of this legislation, I decided to seek input and guidance on how I should vote at Third Reading from the residents of Haliburton-Kawartha Lakes-Brock in the form of my first Constituency Referendum,” said Schmale. “As such, every eligible voter had the opportunity to voice their opinion and regardless of how I personally felt on the topic, I would support the majority of ballots cast.”

“It is important that people, not politicians, have clear input on such an important issue that will affect every Canadian,” said Schmale. “This referendum gave me the opportunity to consult and listen to as many people as possible from a large area in a short period of time.”

The ballot question was whether MP Schmale should vote in favour of Bill C-14. The Bill is the government’s response to the Supreme Court of Canada’s ruling in the Carter decision. If passed, it would allow Canadians, who are at least 18 years old to make a voluntary request for medically assisted dying if they have a “grievous and irremediable medical condition”.

“Many ballots were received throughout the day today and the results are clear,” said Schmale. “76% of respondents have instructed me to vote in favour of Bill C-14 at Third Reading.”

“The response we received from constituents was encouraging, people wanted to make sure I heard their voice,” added Schmale. “As Member of Parliament, it was humbling to read the responses and letters people included with their ballots.”

Each household in Haliburton-Kawartha Lakes-Brock received a copy of a publication outlining Bill  C-14. The package included arguments of people both for and against the Bill and a link to find more information to research the topic. The publication also included an official ballot. 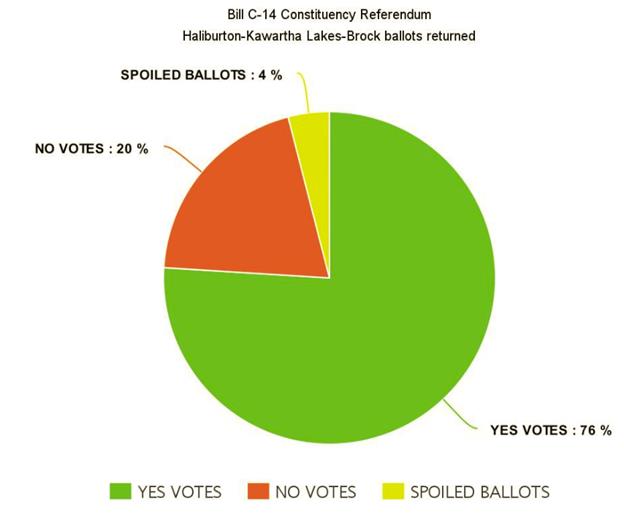