LINDSAY: Local MP Jamie Schmale today released the results of the latest riding-wide constituency referendum. Nearly 90 percent of all electoral reform respondents across Haliburton-Kawartha Lakes-Brock say they are in favour of a referendum on electoral reform.

“The Special Committee on Electoral Reform asked to hear from all Canadians,” said Schmale. “Electoral reform is an important issue that impacts all Canadians and joining a number of caucus colleagues across the country, I sought the wishes of local residents on this national issue.” 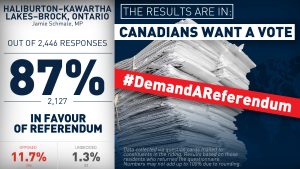 In Haliburton-Kawartha Lakes-Brock 2,446 ballots were cast, and 87 percent (2,127 votes) of respondents were in favour of a referendum on electoral reform while 11.7 percent (286 votes) were opposed, and 1.3 percent (33 votes) were undecided.

“I believe that it’s important that all Canadians, not just politicians, have clear input on an issue that will affect the way we elect our country’s leaders,” said Schmale. “This constituency referendum gave residents the opportunity to have their voices heard and provide their opinions on this issue.

“Both locally, right in in Haliburton-Kawartha Lakes-Brock, and nationally the results are clear,” said Schmale. “A referendum is what Canadians want and expect when it comes to electoral reform because when you change the rules of democracy, every Canadian deserves a say.” 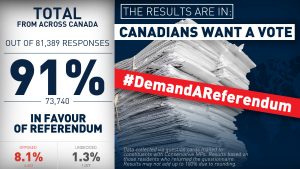 Schmale noted that the responses, letters and feedback he has received since releasing his constituency referendum on electoral reform demonstrates the passion local residents have for issues of national importance.

“Our constituents are engaged, they are passionate and they deserve to have their voices heard,” he said. “I would like to thank each and every one of constituents across Haliburton-Kawartha Lakes-Brock who took the time to express their views and take part in this constituency referendum.”